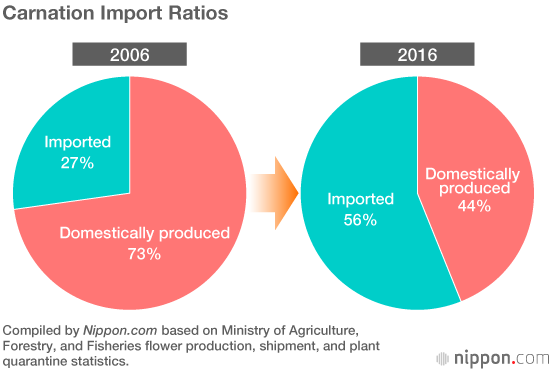 Since 2000, the volume of domestic cut flowers has been in a downward trend. In 2017, 3.7 billion flowers were shipped, the lowest amount since statistics were first collected in 1990. The main causes are thought to be the aging of growers, typhoon damage, and a steep rise in fuel prices leading to decreased use of greenhouses for cultivation. To compensate for the decrease, imports have been increasing. This is particularly the case with Colombian carnations and imported carnations now outweigh domestic shipments.

The number of chrysanthemums, the most commonly grown flowers, decreased by 1% from the previous year to 1.5 billion and the amount of land used to produce the flowers also fell by 1% to 4,758 hectares, driving down the overall figures. Decline in the production of single blooming flowers, used mainly for displaying in the Buddhist altar in the home, was noticeable…[READ MORE]